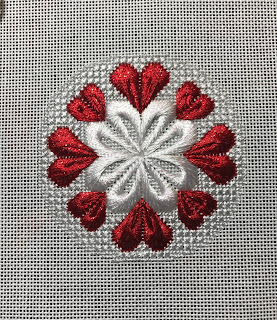 I finished Circle of Hearts by Margaret Bendig this evening.  It truly was a fun stitch!  I just loved doin those hearts!

This will be an ornament some day.
Posted by Eva at 8:25 PM 3 comments: 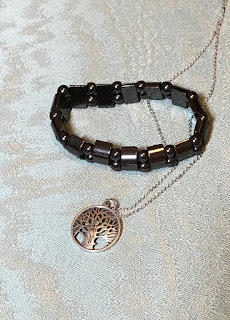 John, my gentleman friend, recently returned from the Holy Land and Egypt.

He has traveled before, but never brought me a gift.  And I didn't expect one.  But this time he did!  He has also never given me jewelry before.

The necklace is an olive tree.  He found a local artesian that was highly recommended, and picked this one because it was patterned after a specific tree in the garden of Gethsemane, and he saw the tree.

The bracelet is Garnet and he got it in a Bedouin village from another local craftsman.

He seemed really excited to give it to me.  I don't know if this a new development in our relationship or if he is just being his nerdy little self.  Either way, I won't look a gift John in the mouth, I said thank you and will wear them often!
Posted by Eva at 5:00 PM 2 comments: 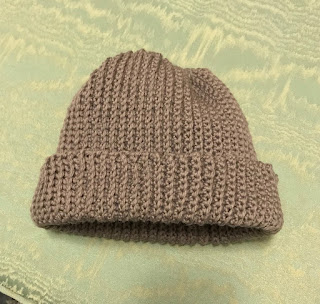 I made a hat!  I think it needs a pompom or something on the top, but I am not sure yet.

The crochet class instructor said the stitches were very even, and she was impressed with my finish!  This evening was the last class.  We were to come with all the crocheting finished so we could put the hat together.

I must tell you that over the course of the week, I took all the stitches out and started over twice!  And many other rows were taken out as I went along because I didn't like how it looked.  But I got it done!  And I was the only one who completed the assignment!  I think the stitches are a little tight, though.  Must work on that.

There is a Beyond Basics in Crochet class being planned in the near future.  I think I will take that class to learn some other stitches besides the basics.

My Oma would be so proud! 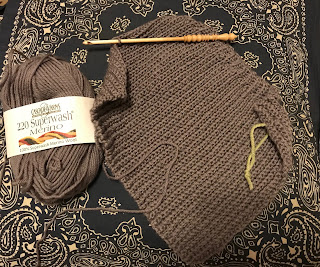 I am working on a crochet project for the crochet class I am taking.  I started this ribbed hat on Thursday, and I want to have the crocheting done by tomorrow, so that we can crochet it together on the last class.  Actually, I could have had it finished already, but I keep taking it out and starting over because I didn't like how it looked or I dropped some stitches, but I will keep going!
Posted by Eva at 10:18 AM No comments: 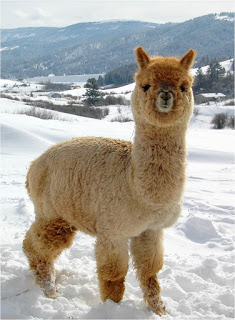 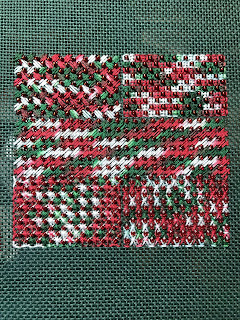 This is the beaded sampler I was working on, but I ran out of beads, so I had to wait until I picked up some more....then I spilled them all....then I had to gather them up off the floor....and it is finally stitched.

Our ANG Chapter is giving incentive point and a charm for doing some beading.  I needed 5 more stitches to earn the charm so I finished them in the knick of time.

This will become an ornament someday.....
Posted by Eva at 2:30 AM No comments: 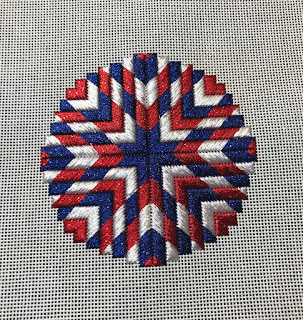 When you lasts saw this piece I was waiting for the fibres to finish the stitching.....that was Sunday.  I ordered the fibres on Monday morning and asked that they be mailed out to me right away.  I should have them by Wednesday at the latest...right?   Well, I found out Wednesday that they hadn't been mailed yet.  I don't know why.  I jumped in the car and drove the 45 minutes in each direction to pick them up myself.

And when I got home, I saw down and finished the stitching.

Ornamentification will happen at a later date.
Posted by Eva at 2:00 AM 2 comments: 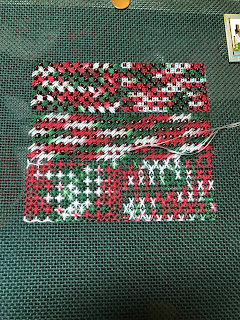 I am working on a beaded project today.  This is a sampler of beaded stitches for my ANG Chapter.  Almost done! 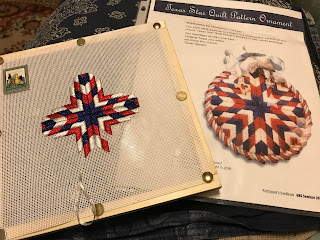 I ran out of fibres!   I suppose I shouldn't complain as I won this kit at our ANG meeting a few months ago.....but darn it!

I really wanted to just start and complete it in one day, but as you can see, there weren't nearly enough fibres in the kit.  I did have the white and red ribbon at home, but not the blue and all the shops were closed since it was late afternoon on a Sunday.  And I have too much going on to take a run to any shop on Monday or Tuesday! 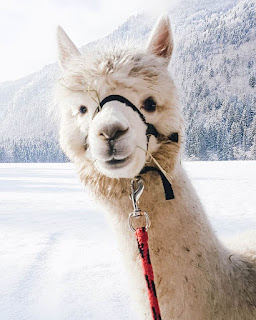 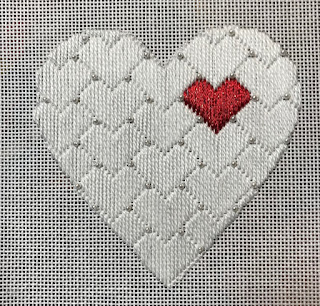 I finished my second Hospice Heart for this year.  I committed to 2, and now have them both finished.....but if the guild is short, I will stitch one or two more....

A shout out to Marguerite Harrington who designed this one!
Posted by Eva at 1:00 AM 1 comment: 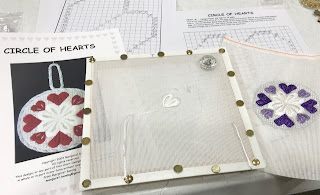 Just started Circle of Hearts by Margaret Bendig.  I am doing the red hearts.  Didn't get too far, but it is a fun stitch!
Posted by Eva at 2:00 AM No comments: 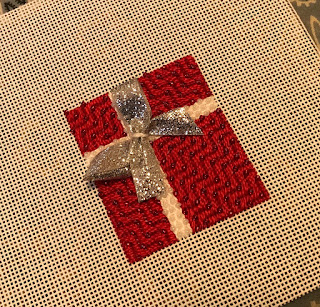 Finished this beaded and stitched ornament late last night.  It was given to us at our Needlepoint guild Holiday Party, and we get credit for two beaded stitches for our yearly challenge.   It was designed by Handblessings Designs.  Ornamentification will happen at a later date.
Posted by Eva at 6:00 AM 1 comment:

First Hospice Heart of the Year 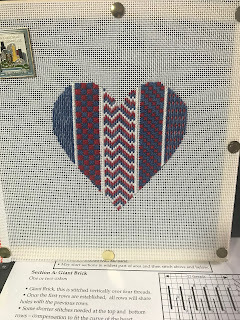 Our ANG Chapter (American Needlepoint Guild) is again doing this Hospice Heart project this year.  We stitch the hearts and they are distributed at a camp for children that have lost a parent or sibling to cancer.

I committed to at least 2 hearts this year, and this is the first one stitched.
Posted by Eva at 1:00 AM 1 comment: 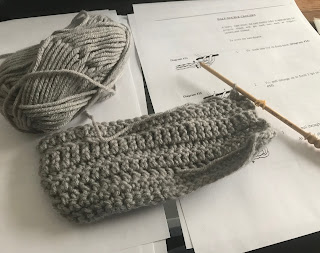 I used to crochet a lot, when I was in high school, I made vests and hats, and sold them.  When the kids were little, I crochet them scarves every year to match their winter jackets.  Over time, I stopped crocheting.  Oma was gone, and I couldn't ask her questions anymore.

I was determined to try it again.  I tried picking up a pattern and some yarn, but I didn't get very far.  The pattern might as well have been written in Greek.....it was all Greek to me.  You Tube didn't help because I didn't know what to look up!

The local yarn shop had beginner classes, but they weren't offered when I was available, and the classes were rather expensive.  I saw an e-mail from 2 Needle Chicks that offered beginner crochet classes at a time that worked for me and they were rather inexpensive, too!  I had met the crochet teacher at the county fair last summer and liked her, so I thought I would give it a try.  I called and was told I was the first person to register, and they needed a minimum of 3 to hold the class.  I wasn't hopeful that two more people would sign up in the next day or two, but they did!  The class was now set!  I had my first class a few days ago, and my fingers remembered what to do once I saw Susan doing the stitches, and now I know what they are called in English!

I sat down last night to practice, and my brain forgot!  But I read the notes, and looked at You tube and tried it again, and it worked.  I do find that I will have to practice a bit each day, and now the You Tube videos even made sense!   Another class later this week...…….
Posted by Eva at 10:07 AM No comments:

House sitting for my son for a few days....the house comes with these two exciting fellows.... 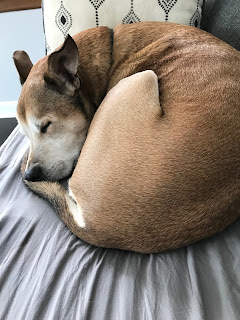 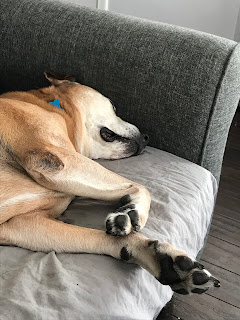 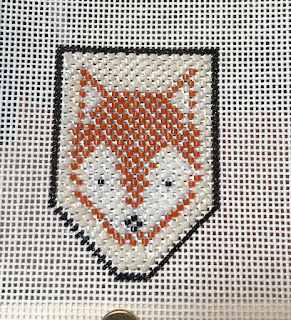 And another WIP bites the dust!  (down to 13 now)   A beaded piece by Nancy Cucci that was taught at our Guild about a year ago, I think....could be longer.....

Final finishing will happen at a later date, once I figure out what I want to do with it.....ornament, scissors fob, something else?

This one is all beaded and was hard to work on holding the stretcher bars and picking up the beads, but since I got my Lowrey stand, stitching on canvas has been much easier!
Posted by Eva at 1:00 AM 4 comments: 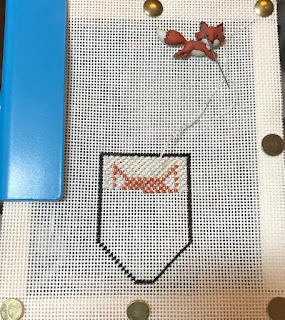 It's Wednesday again, blogging buddies!  Today I am working on a beading project:  Foxy Fob by Nancy Cucci.  I started this one last May and it is high time it gets completed!
Posted by Eva at 12:16 PM No comments:

Second Finish of the Evening! 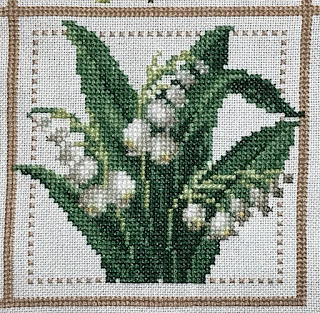 Here is the square I finished last evening.  This makes the 5th finish of the year, and brings the number of WIPs down to 14! 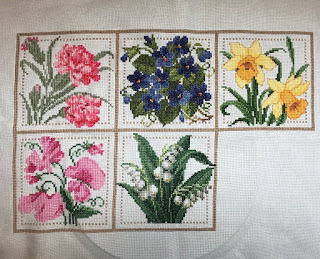 A New Start and a Finish! 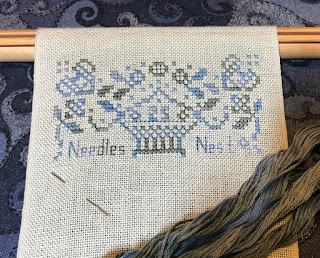 Our Chapter of EGA (Needle's Nest) is celebrating our 25th Anniversary this year.  We are stitching this band sampler, and will be receiving 1 part each month all year long.  Here is my part 1.
Posted by Eva at 7:31 PM No comments: 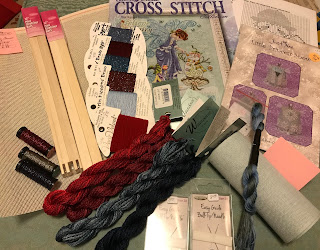 Today, I went to Welcome Stitchery with my friend Marguerite, for their annual Super Bowl Sale.  Met lots of friends and fellow stitchers at the shop and got a bag full of goodies!

If you have never been to Welcome Stitchery, you really should stop in!  Monica and her staff are very welcoming and will help you find lots of goodies you just can't live without!

Three finishes last month!  and another WIP that is very nearly finished!  So right now, it brings the WIP count down to 15.  Hopefully, after the eye doctor appointment later this month, my eyes will be better, and I can stitch longer each day!  Stay tuned!