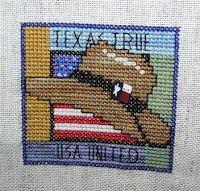 Here's this month's installment of Texas Stitching. I have a total of 9 done now with 3 to go.
I understand that Justin likes these and wants some of his very own. The charts are available at Ginger's in Austin Texas (they will ship to your corner of Texas or anywhere in the USA) and then Justin, you can come and sit with me and I will teach you how to stitch. 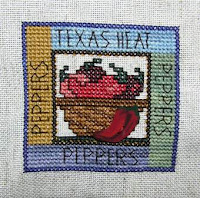 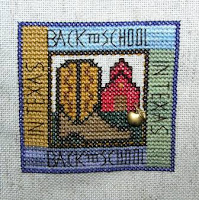 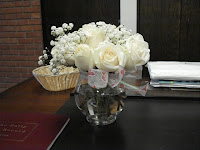 What difference a few months makes! My new boss brought me these roses this morning. No one reminded him of the occasion, no one ran out purchased them for him. He did it all by himself!
It is nice to be appreciated.
Posted by Eva at 2:46 PM 1 comment:

Since Viki and Trey do Opera reviews, I have decided that I would do periodic reviews of various stitching items and books. Here is my first review: 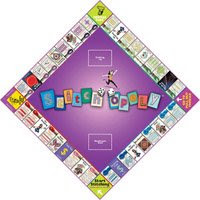 DMC corp (makers of fine embrodiery fibres since the beginning of time) released a needleworker's version of the popular board game, Monopoly, last week. Since I had a 50% off coupon for JoAnn Fabrics, I felt compelled to purchase one. This past weekend, my three lovely daughters indulged my request to try out the game.

It is just like regular Monopoly, where you move around the board buying property. The properties are all named after various stitches and the cards even have stitch diagrams and instructions on how to execute the particular stitch. The pieces that you use to move around are all stitching items, like a scissors, a skein of floss, a ball of perle cotton, a bobbin, the DMC logo, and one more that I forgot. Instead of houses and hotels, it has needlework studios and needlework shops. Instead of Community Chest and Chance cards, it has Needlework Stash and Go Shopping! Go is "start stitching" and instead of jail there is "pull out thread".

We had a lovely time playing the game, but.....DMC should know that stitcher would rather stitch than play board games!

It was a very cute game, and Viki was declared the winner.
Posted by Eva at 9:56 AM 5 comments:

I finished the April Teapot last night, so now I am all caught up! I do have the May Teapot here and ready to go, and the June Teapot is out and will be in my hands by the weekend, but I must resist the urge to start them until May and June respectively. This one is done on 30 ct. Dove Weeks Dye Works linen, with GAST and WDW threads and buttons by Just Another Button Company. I just love the snake that forms the handle of the teapot!
Posted by Eva at 11:07 AM 3 comments:

I finished the February Teapot on Sunday, and started the April Teapot. Once that one is done, I will be all caught up. This one is done on 30 count Linen (color) WDW Linen (fabric). I wasn't sure I liked this design until it was all stitched, and now I love it!
Posted by Eva at 1:25 PM 1 comment: 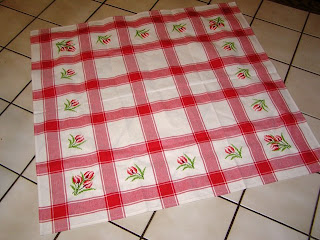 I finished the stitching on this table topper the other day. It was to be my annual contribution for the fashion show raffle. This year's fashion show was to be held next weekend, and was sponsored by the Frauengruppe. Unfortunately, they cancelled the event, and I have an extra table topper. It will not go to waste, I will use it as a gift or raffle prize for a future event.

The chart for this piece calls for extensive backstitching, but I don't think it really needs it, so I didn't do any of the backstitching. Here are some close-ups of the individual squares:

The corner motif has a cluster of three tulips and the small side squares are a single tulip each. 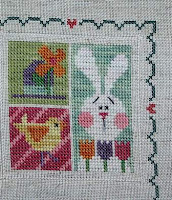 Here is April's Flip It Block. I felt a little funny doing a bunny after Easter, but I guess Easter is in April more often so that's why it's there.

Here are the first four months of the year all together. 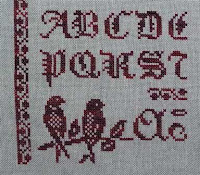 I have added part 4 to the Rose Sampler. I find myself being impatient for the next part to be released!

Here is what the entire piece looks like so far..... 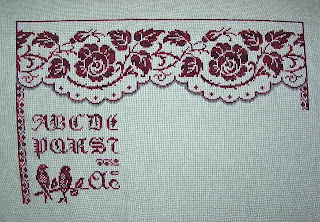