Thoughts on running a youth hostel......

There must be sign on the expressway somewhere that says " please take the next exit for Jugendherberge Rill" This is the only explaination for the visitors that keep showing up at my door for a few nights lodging. Either that, or one or more of my children have put an ad somewhere on the internet to that affect.

We had visitors this weekend from the Donauschwaben Youthgroup from Cleveland, Ohio. Lisa Rimpf, brought her brother Tony and his girlfriend Gretchen, and their friends Manny and Kristian. Kristian was supposed to stay at the Mayer's but he spent at least part of one night at our house.

The reason for their visit was to attend Trachtenball, an event at our German Club, where all the young ladies (and some not so young ones) wear very old traditional garments that their grandmothers wore. It gives them a real appreciation for the comforts of modern clothing, and teaches history and tradition.

I should add that Lisa has been here before....a number of times.....and I don't think it is because she enjoys my company. Tony is the only other person that lives in this house. Could it be that she is really visiting him? 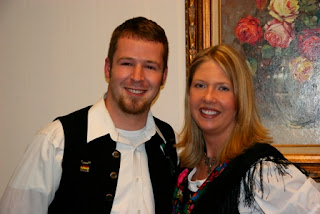 What's in the works?

My daughter asked what I was working on. Now, Viki, when have you known me to not have a stitching project going?

Usually I have three projects in the works. Rocky Mountain Christmas, which I work on for 10 hours each month (well, 20 hours until I am caught up), a medium sized piece (currently ducky borders on bath towels for JC's Birthday in August) and a medium-small piece (currently a model for Sue Hillis).

As soon as I get the model piece and two quilt squares done, I will be stitching on the American Soldier Memorial project exclusively until it is finished.
Posted by Eva at 11:00 AM 2 comments: 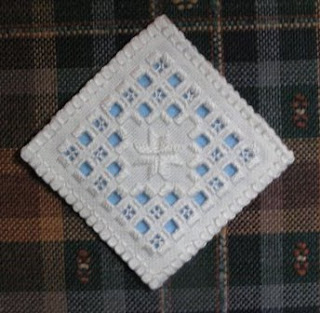 I finished this hardanger piece last evening. I needed to do a small piece for an exchange, so I chose this one because I wanted to learn how to do the Scandanavian four-sided edge stitch. I am happy with the results. But, I need to figure out what it is I made. Is it a coaster, or is it an ornament, or is it something else?
Posted by Eva at 9:22 AM 1 comment:

Did you know that I am inspiring? 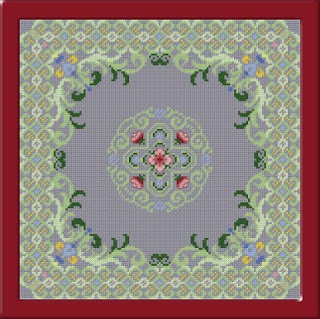 This chart is named Eva's Garden. Laura Tilson of Snapdragon designs, designed this a few months ago, and named it after me! She said I inspired her! I got my autographed chart before Christmas, so now I must make time to stitch it.

To Honor the First Responders: 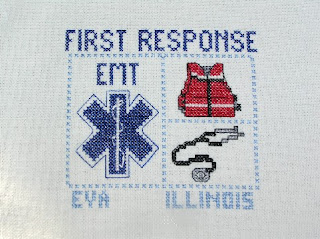 This quilt square is for the Hurricane Katrina Quilt project, to honor all the rescue workers from around the country who went to help. It is being organized by the same person that did the World Trade Center Memorial Quilts, which are very moving. I saw them in person in Nashville in August of 2005. Kathie Baumgardner does a remarkable job, and you can read about her work here: http://www.wtcquilt.com/

Yes, that's right, I am thankful for bad weather today.

The bad weather prevented the protesters from protesting at today's funeral for a young man killed in Iraq. 10 or 11 were scheduled to fly in today, but the ice and snow grounded their flight.

Fred Phelps and his small group have been in the news garnering disrepute as they cross America and stage vulgar demonstrations at funerals of American soldiers killed in the Iraq war. Phelps, a disbarred attorney, calls himself the reverend of the controversial Westboro Baptist Church in Topeka Kansas. While they call themselves Baptists, there are no other recognized Baptist churches associated with them.

These zealots have now staged well over 100 of these funeral protests in the name of God. They are delusional because their methods are not projecting God’s love, but rather their own hatred. During the protests, Phelps’ zealots hold up offensive and profane placards protesting the war in Iraq, abortion, homosexuality and even the Catholic Church.

As mourners arrive at the funerals of their loved one, they are faced with scripture quotes, vulgar slurs and offensive signs stating that the death of their loved one is God’s wrath on America because of our sins.

We are thankful that the weather prevented their coming to St. James. The family and friends of this young man are having a difficult time as it is, and didn't need to see these idiots.
Posted by Eva at 11:54 AM 5 comments: 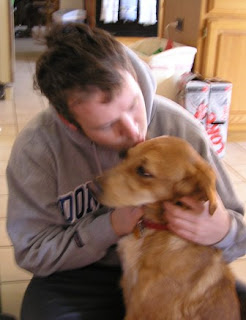 The imaginary girl friend thing just wasn't working for him! So now, by his own admission, his "new girl" is Cassie, the new dog whose ownership is still unclear. Tony's relationship with Cassie is working out rather well. She seems to be rather low maintenance, and is not very demanding. It will be rather difficult for Tony though, when he needs to bring a date to his sister's wedding.....

War is hell. Every mother (as well as other family members) lives in constant fear of a visit from the military when they have a son or daughter in the service. One of the women who is active at the church where I work lost her 20 year old son when his vehicle was hit by a roadside bomb in Iraq a few weeks ago. I have been involved in the planning of the services for this young man, but really wanted to do something more concrete as a memorial to him. The American Soldier Memorial Project is an effort by stitchers to make a memorial piece for the families of our fallen servicemen and women. I will be stitching this piece in memory of Pfc William "Will" Newgard.

Once it is finished and framed, it will be presented to his family. They can choose to keep in their home, or have it hung at the church or in the Illinois state capital.

If you would like more information about the American Soldier Memorial Project, please visit their website: http://crossstitch.about.com/gi/dynamic/offsite.htm?zi=1/XJ&sdn=crossstitch&zu=http%3A%2F%2Fgeocities.com%2Famericansoldiermemorialproject%2F 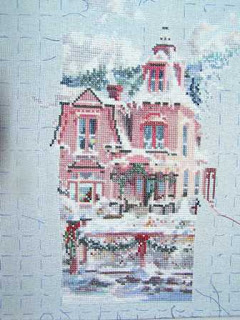 Another Rocky Mountain Christmas update
Here we are after 80 hours of stitching. I should have been at this point at the end of September, but wedding and Christmas got in the way. I stitched 970 stitches this 10 hour session, and have completed 9953 stitches total so far.
I have completed pages 2 and 5 of the chart, (there are 6 pages total) and am more than 1/3 finished with the project. If all goes well, I should be done around August of 2008. 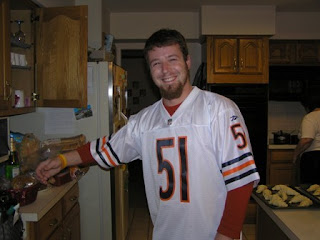 Tony and his new girlfriend:

Please don't tell him there is no one there. He has never had an imaginary friend before, and we don't want to burst his bubble. He looks so happy.

The great thing about this imaginary girlfriend, is that she hardly eats a thing, and doesn't take up much space. She's a real cheap date, too.

Last February, Nancy Jantz and I started this piece together. The plan is to stitch 10 hours on it each month. If we keep it up here is what it will look like when finished. 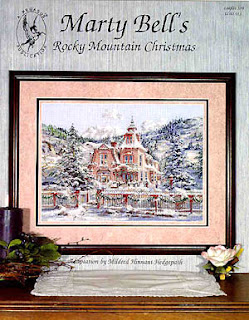 I am a bit behind. I just completed 70 hours, so here is where I should have been at the end of August. So far I have put in 8983 stiches and am almost 1/3 finished. 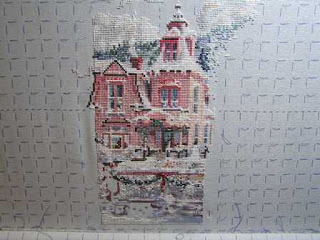 Hopefully I will catch up soon. I estimate the project should take about 2 1/2 years to complete if I stitch 10 hours each month. Watch this space for future updates.