I have had a number of small finishes this month, the first is Thread Gathering by Little House Needleworks, stitched on 32 ct Raw Linen with Cresent Colors.

The next one is Glory Bee's Flying Monkeys, stitched on 28 count Ivory Joblin with Gentle Arts Sampler Threads. I have the custome frame for this one, which will look even better once it is framed. 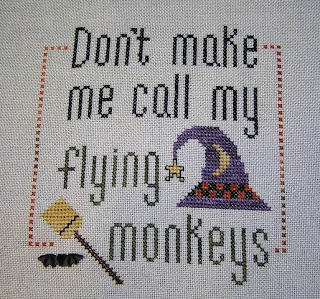 This one is Waxing Moon's My Needle and My Floss, stitch on 28 count Ivory Joblin with Gentle Arts Sampler threads and Weeks Dye Works. 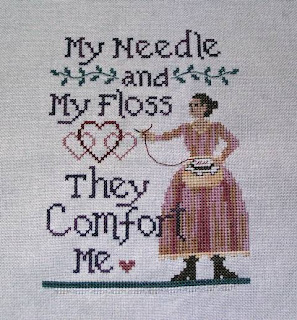 And her is my WIP (Work in Progress) Stoney Creek's Elliot and the Tree stocking for Cooper, stitched on 28 count antique white Jubilee with DMC and Glissen Gloss. I changed the colors of the sweater from burgandy to blue. 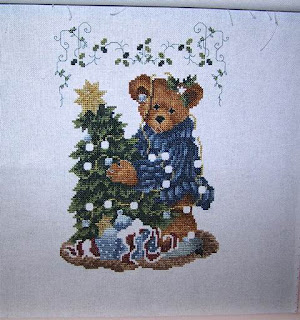 All my life I have been know by different labels. I know I have always been an individual, but at first I was known as Nick and Maria's daughter, then Trudi and Walter's sister. I was Peter's wife, and ultimately Viki, Tony, Mark and Kristin's Mom. Being "Mom" is certainly the single most important label that I have had. I have also been known as Frau Rill, the German teacher and the folk dance instructor, and Tante Evi to my nephews and other honorary nieces.

Yesterday, I was hit with a new label. I was at another parish for an Archdiocesan meeting, and stopped in at their office to make some phone calls as our phone system at work had been down for two days and I needed to confirm some details for some upcoming funerals. I have known some of the people in the office for a few years, but not all of them. As I was leaving, I heard "Hey, wait!" so I stopped and asked what was the matter. The woman said to me "Are you Trey's mother-in-law?" Then it hit me. I am a Mother-in-law! This is nothing new, as I am a mother-in-law three times already, but suddenly it hit me! I have a new label! Trey's mother-in-law! And Trey is famous!
Posted by Eva at 9:30 PM 5 comments: