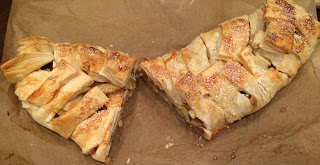 I backed an apple studel.  It looked good, but I don't know how it tasted.  My taste testers ate it all, and I didn't even get a crumb!  I will just have to suck it up and make another one!
Posted by Eva at 6:05 PM 1 comment:

Something New from My Kitchen 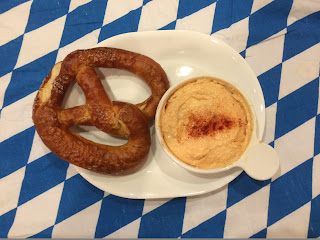 My favorite appetizer or snack at a German Restaurant is Obatzda, a Bavarian Cheese Spread usually served with Bavarian Pretzels.

The creator of the original obatzda recipe was Katharina Eisenreich, the innkeeper of the Bräustüberl Weihenstephan from 1920 -1958. She served it to her guests as a light snack to accompany their morning beer and soon the idea spread, with many beer gardens creating their own special recipes.

I have been wanting to try and make my own for a long time, and I finally did it!  And I like it!  I will be serving it to my taste testers soon, I hope they like it too!  I will have to work on my Pretzels, this one is from Marianno's.
Posted by Eva at 8:27 PM 1 comment: 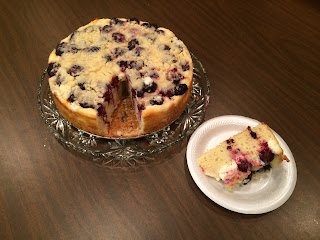 A few weeks ago, I baked a raspberry cream cheese coffee cake.  It was good, but I felt I could do better, so I set out to bake it again last night.  I increased the cream cheese and sugar in the cream cheese layer, and doubled the fruit on top, and used blackberries instead of raspberries (because the blackberries were on sale really cheap)! but other wise it was the same...

It was a hit!  All my taste testers declared it better than version 1, and there isn't a crumb left 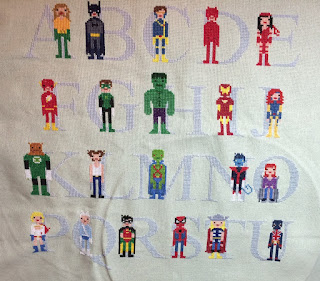 Got some stitching time in this week.  I am working on the Superheroes Alphabet.  I would like to get it finished so it can be framed and given to my little Justin for Christmas.  Hope to have it done next week.
Posted by Eva at 11:08 PM 1 comment: 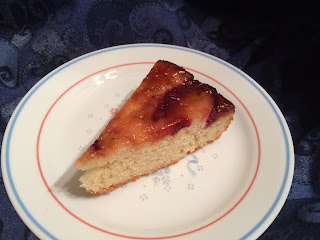 This week I baked a Plum Upside Down Cake (I had some plums I needed to use up).  We can also call it Plum cake, version 5.  My taste testers liked it a lot!  Version 4 was their favorite but this one came in a close second.   I forgot to get a picture of the entire cake, and this was the only piece left.

The recipe called for 4 plums, I used 5 but next time I make it I would use even more, I just like a lot of fruit on my fruity cakes.
Posted by Eva at 10:39 AM 1 comment:

I Have a Finish! 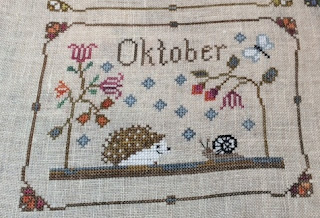 I did a little stitching the past few days, and managed to finish the October part of the Snowflower Diaries Joyful World Stitch-a-long.  The hedgehog is just too cute!

I am ready to start the November chart, but need to purchase the GAST color for the frame so I can get started.....
Posted by Eva at 1:42 PM 4 comments:

What I have done instead of stitching.....

Many years ago, I gave up baking for lent one year.  During that time I realized that not baking made my life a bit easier, and I thought I might lose some weight in the process.....well that part didn't happen but I found that if I needed to take something baked to an event or meeting, I could hand one of the children a box of brownie mix and they were more than happy to make it!  Later, they learned to follow a recipe and bake from scratch and life was good.  Since then, they have all moved out on their own, and no one is there to bake for me.  Since retirement, I have spent some time in the kitchen, making jam, trying other new recipes and generally enjoying the "no pressure".  Since my grandmother's recipes were not written down, and mother's recipes are quite unorganized and with the dementia she can't remember anything, I was on a quest to find some recipes that I remember from my childhood and youth.  Two years ago, I wanted to make the Walnut Torte that my mother always made for our birthdays.  I found her recipe for the frosting, but really had to search to find a cake recipe the was like the one she made.  My dear cousin Liz had a cookbook that contained a recipe that seemed right, so I tried it, and it was perfect!  My mom loved it but never remembered baking at all, but my aunt said it was spot on!

After the summer of jam making, and the cooking and baking for John's big birthday bash, I wanted to continue my kitchen adventures....and I started remembering the plum cake that my mother and grandmother used to make.  I found a recipe that I thought might work, and bought some plums and gave it a try. The cake tasted good, but it wasn't quite right.  My father said it was really good but I should have baked it a little longer.  And who knew there were different kinds of plums and I used the wrong ones!   So version 1 was a bit of a fail, and I went in search of other recipes.  There are two basic version of this plum cake, one with yeast and one with baking powder.  I asked my aunt, and she said the one with yeast was the one our family made, and the next day, she presented me with the dough and her recipe!  Yay!  I bought Italian plums, and baked the plum cake.  Version 2 was also somewhat of a fail.  The dough wasn't quite right, my dear aunt is slipping too and that accounts for that part.  The plums were great but they shrunk during the baking so I should have overlapped them on the top of the cake and she didn't tell me to put sugar (with some cinnamon) on top of the cake before baking.  I put powdered sugar on it before serving and it tasted ok, but it wasn't as pretty.  I got another version of the recipe, this time with baking powder instead of yeast from another older lady at our German club that she has been making for years.  I bought more Italian plums and  made that for an EGA meeting.  It looked great and tasted great, but it was more 'cakey' than I wanted.  So version 3 was not a fail, but not what I was looking for.  (may try it again and used a larger baking sheet instead of a spring form pan)   I then went back to the dough recipe for version 1, and used a different size baking sheet, and used Empress plums (they are bigger than the Italian plums, they are what is in season right now) and I baked it a bit longer.  My taste testers at German school were able to taste versions 2, 3, and 4 and let me know that version 4 was the best!  And I liked it the best too!  It isn't quite the recipe I remember my mother and grandmother making, and it looks different, but since we all like the way it tastes, it is now my favorite and will be put in my own cookbook for my family, so they don't have to go through what I am going through.

Here is a picture of the cakes I made for the EGA meeting, Plum Cake version 2 is on the left and my famous Obst Torte is on the right.  There weren't many leftovers!

It was not a good month.....not much stitching happened.   I am in a slump and just can't stitch for more than 20 minutes at a time......Not one single finish.  Nichts, Nada, Nothing!

I am hoping October will be better....