Some Random Thoughts on Mail Art.....

Those of you that are parents might understand. Remember when you took your child to school for the first time, and had to leave him/her there? The child was fine, eagerly looking forward to school, but you yourself were a wreck having to leave your precious child in the hands of others for even just a few hours?

Well, that's how I felt late this afternoon, at the post office. I stood in line, waiting for my turn. I was hoping I would get the woman clerks, the man probably wouldn't know what to do! Finally it was my turn, and I walked up to the window and handed the lady my 'baby', my lovely piece of mail-art. I said "could you please hand stamp this?" with a quiver in my voice and a lump in my throat. I was having separation anxiety, having to hand over this piece of myself to a perfect stranger. The lady was very kind, and commented on how lovely the piece was, and asked who did the needlework. She was a bit flustered, and said, "I can't stamp this, it will get ink on it and it's far to pretty to mess up!" I assured her that was okay. She tried to talk me into putting it into another envelope or at the very least into a zip lock bag so it wouldn't get dirty and I almost wavered, but in the end I said "No, it needs to go through the mail just like it is, and we will hope for the best."

I turned and walked away, trying not to cry. My stitched envelope will be fine, and I hope that every person in the US Postal System that encounters the envelope treats it with love and care until it reaches it's final destination.
Posted by Eva at 7:51 PM 5 comments: 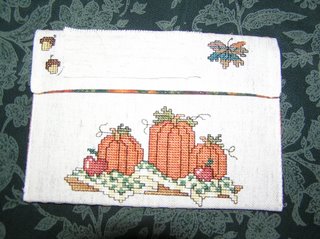 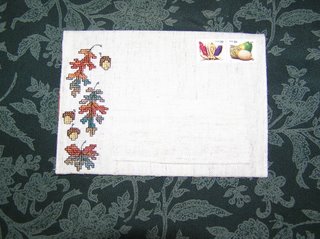 I love a challenge, and stitching a piece that is actually an envelope that goes through our postal system is the latest challenge that I have taken up.

It is not hard to do, but you can't just go out and buy a chart and start stitching. It takes a bit of planning, and common sense, so that everything is right side up when you put it all together.

Here is my latest piece, for a fall mail Art exchange. The name and address as well as the return address are all stitched but have been covered up to protect the innocent. The motifs were taken from Sue Hillis' It's Autumn chart. The leaves are stitching in Caron's Waterlillies "fiesta!" for the colorful variegated look. The 'envelope' is lined with fall fabric with pumpkins and cornucopia all over, and a postcard of Chicago is on the inside to keep it from flopping over. Those are real stamps on the 'envelope' with squash and Indian corn on them to complete the fall theme.

I will be taking it to the post office this afternoon, after work, and then it will be on it's way to the recipient.
Posted by Eva at 12:30 PM 1 comment:

Sometimes it hard to be the boss.....

I had an issue with one of the teens at work on Saturday. He made some bad choices which resulted in a great deal of stress and inconvenience for a lot of people, mostly me.

When he didn't show up for work, I had to rush over there and work the reception desk all afternoon and early evening. (It seriously cut into my stitching time!) I caught him in a number of untruths. He lied to his parents that he had secured a sub on Wednesday already. He lied to his brother that he had called me and talked to me, and he lied to me first that he was sick, then that his home phone was out of order, and then that he was home in bed. He didn't get a sub, he left me a voice mail on Saturday, mid-morning, and he wasn't sick, he was out with a friend. When I called his home to see where he was, the phone was working, and he wasn't there. When I called his cell phone, he told me he was home, sick, in bed. Can you say BUSTED!!!!!

I have a real soft spot for all the teens that work for me. I find them delightful! I enjoy teaching them things, and watching them grow and mature over the years. I bend over backwards to help them out if they find they are in a bind and can't find a sub to work the shift they are scheduled for. If this kid had just told me on Wednesday or Thursday that he wanted to do something with a friend, I could have worked it out.

It is unfortunate, but I had to let him go today. This isn't the first time he messed up, and has received two warnings before this incident. I know I did the right thing, both for the office and to teach him a hard lesson, but I still feel bad........ I just hope he has learned something from this experience. But I still feel bad!!!!
Posted by Eva at 8:31 PM 3 comments:

Something Other Than Stitching....

My daughter has requested that I blog about other things besides stitching. When I started this blog I intended it to be my "stitching diary", but today I will take a detour from that original intention.

Today I contemplate why I volunteer. Why I spend almost every Friday evening of my life teaching children and teens to folk dance. Why do I do it? Of course, I enjoy working with the kids and the teens, but that's not the only reason. I do it because someone has to pass down the traditions of our ancestors. I do it because I love to watch the little ones dance and giggle. I do it because my heart swells with pride when the youth group does a series of energetic dances with complicated footwork. I do it because I have knowledge that I want to share.

What I have learned during my lifetime does no one any good if I don't pass that knowledge along to those younger than I. Many times I would rather go out to dinner with friends, or go out to the movies, or just go home after a stressful day at work and put my feet up, but I don't. I honor the commitment that I made to my heritage. Add performances on many Saturdays and Sundays, and I spend an awful lot of time volunteering.

But there is a problem. The problem is not the children or the teens that I work with, although sometimes they do try the patience of a saint. The problem is the parents. The parents who come to rehearsal to socialize and not watch their children, and when I have to repeatedly reprimand someone for misbehaving, I am accused of "picking on the child". The parents who are too busy drinking beer to listen when I make announcements, and then claim that I never informed them of changes, and I should have told them personally. The parents who are relatively new, and proceed to tell me how to do my job, a job that I have been doing for 24 years without pay.

I feel bad for the kids, but my days of volunteering are quickly drawing to a close.
Posted by Eva at 9:55 PM 5 comments:

Not much to report this week. I have been stitching away on the six Gingerbread Man ornaments that I am making, but they are nowhere near done, and I am getting a little sick of doing browns. I also started painting a frame for Lizzie*Kate's If the Broom Fits. Couldn't find a neon green frame anywhere, so I decided to make one. It needs another coat of paint. Once that is done, I will post a picture.

My latest stitching finish! Two Hardanger and Crystal Wedding Pillows by Lorri Birmingham, stitched for my son Mark and his bride Karen. This was my first all-hardanger project, and I am quite pleased with the results. The photo does not show the pearls and crystals that are attached that make them sparkly! I will be starting the matching wedding sampler soon.
Posted by Eva at 1:08 PM 7 comments:

Labels: finishes
Stitching the Night Away describes what I do! I stitch! A lot!
Posted by Eva at 11:22 AM No comments: