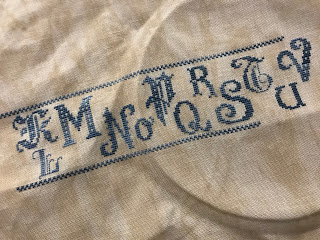 This week I am doing some Model Stitching for Sue Hillis.  I do have her permission to show this piece.  It will be a band that goes around a box, and will have other components, a box top, and pin cushion, and perhaps some other things.  She will be teaching this piece at various shops across the country this year.  I am looking forward to stitching it a second time for myself.
Posted by Eva at 7:46 AM 1 comment: 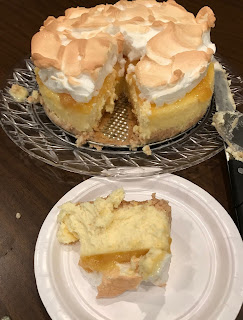 This past weekend I made a Lemon Meringue Cheesecake.  It turned out quite yummy!  It could even stand alone as a lemon cheesecake without the lemon curd and meringue on top!

I always have trouble with meringue on top of a pie or cake, it always ends of shrinking no matter how well I 'seal' it.  Will have to practice some more.

Even so, it was well received.  My taste testers finished every last crumb!
Posted by Eva at 7:17 PM 2 comments: 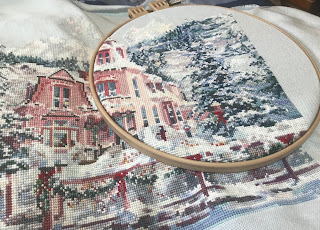 Rocky Mountain Christmas is almost done!  Not much left......I must get it done!
Posted by Eva at 11:00 PM No comments: 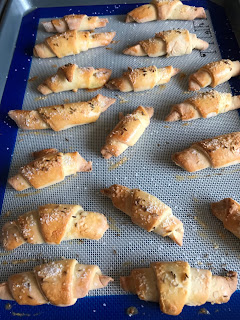 For the first time ever, I attempted to make Salz Kipfel.  I got the recipe from a friend, it was her husband's grandmother's recipe that she wrote down after watching it being made, and it is a bit sketchy.   But they turned out pretty good!  I have made note of a few tweeks for the next time I make it. 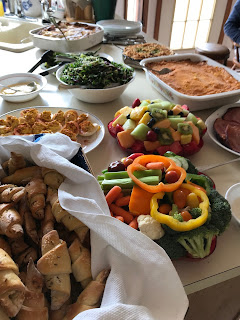 Here is the rest of the Easter Buffet.  There were only 9 of us, and I am used to cooking for 20 or 30.....we had ham, cheesy potatoes, German Apple pancake, deviled eggs, kale salad, veggies, fruit, and Kipfel.  I made a fruit torte for dessert.
Posted by Eva at 12:40 PM No comments:

March was a good stitching month!  Lots of stitching time!  8 finishes, including the Santa Train Stocking that seemed to be taking forever.  I also worked on two of my Works in slow progress!  I mapped out my "May"nia stitching also, although I may start one or two of those pieces early.