A Tribute to Gnorman

Because he is missed, Gnorman, the Gnoble Gnome has been imortalised in a cross stitch chart by Sue Hillis. This is just a preview, but as soon as the printed version is released guess who will be stitching it! 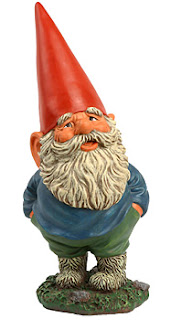 Gnorman the Gnome began his life at a Menards in the Northwest suburbs of Chicago. From there he traveled to Richmond, VA, via USPS (with air holes in the carton) and was lovingly placed among the flowers in the garden of the Hillis home. Family members took great delight in moving him about, so that he could have a change of scenery every so often, much to the annoyance of Sue, who spent a great deal of time looking for Gnorman, thinking he had run off or been gnome-gnapped. He lead a quiet life, with gno worries or cares. He was visited by all of the Hillis grandchildren as well as the wildlife in the area.

Recently Gnorman was found to be missing again, but this time gnone of the family members were guilty of moving him. Sue began stalking her letter carrier, thinking a ransom gnote would be sent soon. That ransom gnote gnever came.

I received the following message from Sue today: I am sorry to tell you of the demise of our friend Gnorman...we found him in the woods a few days ago with bite marks on his head and other parts of his anatomy...I am thinking a dog must have had his way with Gnorm...hopefully he lost consciousness early in the assault and was gnot awake for the entire experience. We will have quiet ceremony, and he'll be buried on the corner that we use as a memorial garden for Panzer, Maggie, Puddles, Jammer, and gnow, Gnorman...

Goodbye Gnorman, you were a gnoble gnome! You will gnever gnow how much you will be missed.


Update: In a statement released from the Roaming Gnome, Travelocity spokesgnome, Roaming Gnome stated that he was saddened to hear of Gnorman's demise. "He was more than just a cousin, he was a dear friend." Roaming Gnome went on to say that he would have gladly paid any ransom asked for to return Gnorman to his home.
Local authorities continue to look into Gnorman's demise and have questioned area dogs and have cast tooth prints in plaster in attempts to match the fatal bite marks. The public is asked to beware of dogs absconding with beloved gnomes. A reward by the United Brotherhood of Gnomes has been offered for any information leading to the apprehension and gneutering of the offending dog. 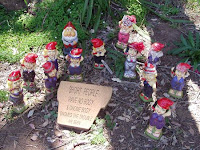 Sue was comforted by all the gneighborhood gnomes that attended the burial. We didn't gnow he had so many friends! 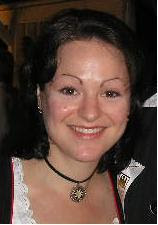 Happy birthday to my first born! It seems like just yesterday when you were telling me "I can't possibly wear THOSE sock, they don't have any lace on them!"
Posted by Eva at 12:41 PM No comments: 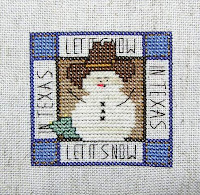 When your son-in-law is from Texas, it makes you want to stitch some Texas themed things......so here are the first 3 of the Texas Monthly Mini series. I plan to do 2 or three each month until all 12 are done. There are charms and /or buttoms that go on each one, but I won't add those until the very end. I can't tell you what I will do with them when they are all stitched, it's a secret! 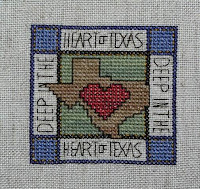 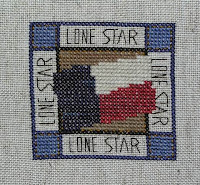 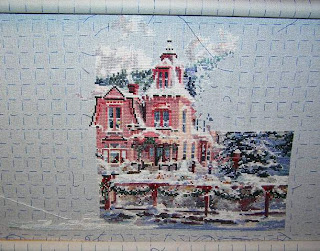 I have a few more finishes already this month.
The first is ABC Apple - by Just Another Button Company. The chart is free when you buy the buttons, such a deal! It's done on 28 count Graziano Chocolate Milan fabric with Weeks Dye Works and Gentle Arts Sampler threads. 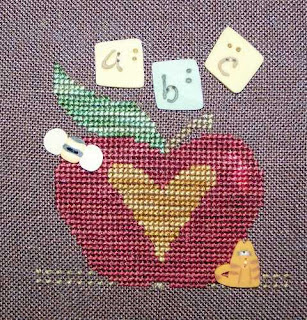 The second is Priceless by Glory Bee, done with DMC instead of the recommended silks, on 36 count Edinborough linen in summer Khaki. This is a special finish because the chart was sent to me by a good friend. 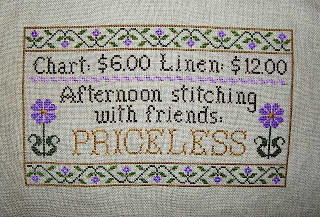 Although Lizzie*Kate is not one of the designers I like to stitch, they do have some cute charts. A few years ago, I had seen the 2003 Flip It Blocks all stitched on the same piece of fabric with a border around it, so I started kitting up this project. The goal for 2008 is to stitch one block each month. Because I was too lazy to count threads a bunch of times to start the January block, I did the February block in January because the right edge is in the middle of the row, and I did the January block in February. Going forward, I will be stitching the corresponding block each month.

Here is the January block: 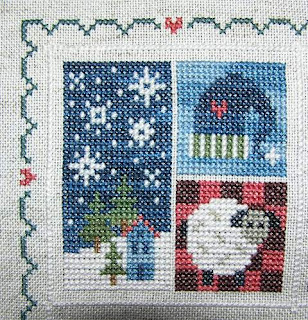 Here is January and February together with the border on them: 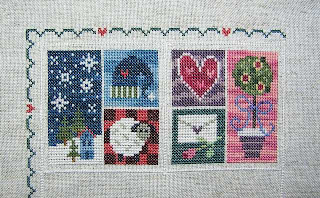 Watch this space for monthly instalments. 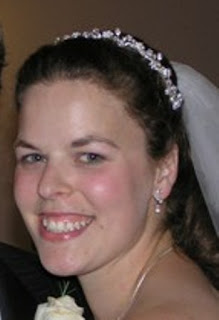 Well, I finally had a chance to pick this one up again. Last time this one saw daylight was in April. (So much for stitching 10 hours each month!) 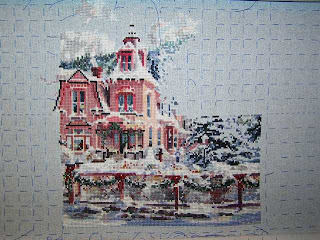 I finished two more pieces before the month ended. 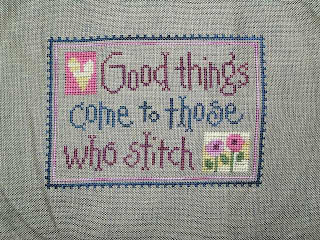 The first is by Lizzie*Kate called Good Things. It is done on 32 count Tumbleweed linen with overdyed threads:

The second piece is the February Flip-It Block from Lizzie*Kates 2003 series. 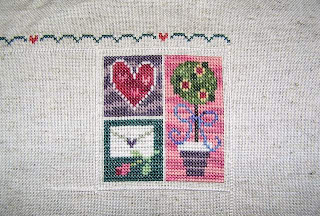 It is done on 28 count Rustico, with WDW and GAST threads. I am planning to do one block a month, so that by the end of the year the entire piece will be finished.